Welcome to the Second Extinction Wiki!

We're a collaborative community website that anyone, including you, can build and expand. This is an unofficial wiki about the 3 player co-op shooter video game, Second Extinction, where players work as a team to take down large groups of savage mutated Dinosaurs. Second Extinction is developed by Systemic Reaction for PC, Xbox One, and Xbox Series X.

About the Wiki · Recent changes · Policies and guidelines · Wiki Staff 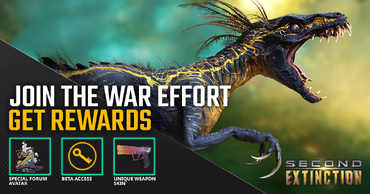 The War Support was a referral campaign designed to reward players for spreading the word about Second Extinction to their friends. When a player signed up, they were given a unique referral link which they could then share with their friends to get them to sign up.

The campaign launched with the announcement of the game as a way to spread awareness. Only a limited number of slots for the Beta were available, with the reward being discontinued on July 9th of 2020. Ultimately, the Beta was canceled in favor of an open Early Access on Steam.

Retrieved from "https://second-extinction.fandom.com/wiki/Second_Extinction_Wiki?oldid=3016"
Community content is available under CC-BY-SA unless otherwise noted.